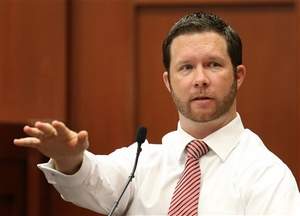 Jonathan Good is a neighbor of George Zimmerman, the man accused of murder in the death of Trayvon Martin. Good, an eye witness to the fight between Zimmerman and Martin that resulted in the Florida teen’s death, testified that he believed Martin to be the aggressor in that fight.

Like the Center's previous lesson centered around the testimony of Rachel Jeantel, watch the clips, answer the questions below, and follow the link to Harvard's Project Implicit, which seeks to identify our underlying assumptions and biases based on a number of factors.

1.When you saw John Good on the witness stand, what were your first impressions of him? What if any assumptions did you make about him based on what you saw and heard?

2. To what extent do you think Mr. Good’s race, gender, national origin, age and mode of speaking affected your reaction to his testimony?

3. When you saw the defense attorney asking him questions, what were your first impressions of the attorney? What if any assumptions did you make about him based on what you saw and heard?

4. To what extent do you think the attorney’s race, gender, national origin, age and mode of speaking affected your reaction to him?

5. You saw Mr. Good testify. As the New York Times reported, “From the stand, he took great care in answering questions, making sure that neither the prosecutor nor  the defense lawyer twisted or changed his words. At times he corrected them. He was as methodical in saying what he did not see and hear as what he   did.”
http://www.nytimes.com/2013/06/29/us/neighbor-describes-glimpse-of-fight-in-zimmerman-case.html?pagewanted=2&ref=trayvonmartin Can you compare how Good’s testimony was received with that of a prior witness, Rachel Jeantel?

6. Many commentators criticized Ms. Jeantel and her manner of testifying and characterized her as ignorant, stupid, inarticulate and uneducated. To what extent if any do you think their reactions resulted from assumptions they made about Ms. Jeantel's race, gender, national origin, age and mode of speaking?  How did the reaction to Mr. Good’s testimony differ from that to Ms. Jeantel’s? Why did it differ?

7. One commentator called John Good “The infallible White Man Who Has Spoken”  http://www.truth-out.org/speakout/item/17306-trayvon-martin-witness-john-good-and-america What do you think he meant by that description? What did he mean when he said,” We can all go home now. Nothing more to see here. The only question is why did they wait so long before we saw anyone with genuine authority to speak, and not waste precious court and TV time with those… women who say they also saw the scuffle and, most important, with that borderline human being who, when not speaking in Ebonics, mumbled in the sub-language, and who gave us attitude, and just lied.”

8.  “There is no question that race is the 800-pound gorilla in this trial,” said Ed Shohat, a Miami lawyer. Do you agree? Why?  To what extent do you think race may have been a factor in the reactions to Mr. Good’s -- and Ms. Jeantel's -- testimony?

Race, bias and the Zimmerman jury
By Richard Gabriel

"In the courts and in society, we tend to think of racial bias as overt bigotry and imagine that the George Zimmermans and the Paula Deens of the world hold negative stereotypes of other races and intentionally think less of them as people. Actual bias, however, operates in the brain in a much different way…"
http://www.cnn.com/2013/07/16/opinion/gabriel-bias-zimmerman

And this piece about teacher’s responses to ‘teaching Trayvon':

The Hairpin website reached out to teachers across the country with a tough question: How would you teach the Trayvon Martin case, and George Zimmerman's acquittal? What is there to say, and what is there to be learned? http://thehairpin.com/2013/07/teaching-trayvon