The Oklahoma Republican who chairs the U.S. Senate’s Energy Committee is the author of a book titled “The Greatest Hoax: How the Global Warming Conspiracy Threatens Your Future.”

The influential Associated Press Stylebook is now advising journalists to refer to politicians like Sen. Inhofe as climate change “doubters” or, when space permits, “those who reject mainstream climate science.” The latest update in the stylebook’s global warming entry, announced Sept. 22, 2015, specifically advises writers and editors to avoid the terms “denier” and “skeptic.”

Why? It’s about precision and fairness, AP science writer Seth Borenstein told a skeptical Bob Garfield, co-host of NPR’s “On the Media.” Borenstein, who has been covering the issue for two decades, said the move was partly in response to complaints from the Center for Skeptical Inquiry, whose members use science to debunk myths and were troubled by seeing people who reject climate science being referred to as “skeptics.”

The other argument is one that has more to do with fairness, and the effort to find neutral language in a politically charged debate.

One of the challenges facing journalists is to avoid adopting the loaded language used by partisans in a political debate. Even though there isn’t much of a debate among scientists about whether our planet is experiencing climate change or whether human beings are to blame for the phenomenon, politicians like Sen. Inhofe are continuing to argue about it.

To be fair to the facts, journalists need to avoid creating a false equivalency by providing balance, or equal time, to those who reject climate change science. But journalistic fairness does require the use of neutral language when describing the partisans of the ongoing political debate.

The AP Stylebook has a similar goal when it advises journalists covering abortion to avoid terms like pro-life and pro-choice and instead look for neutral language like anti-abortion and abortion rights advocates. (And its recommendations carry great weight. Because so many news organizations cannot afford their own Washington and foreign bureaus, they are more dependent than ever on stories from the Associated Press.)

The term “denier” is most commonly associated with those who deny the Holocaust occurred, Borenstein said. “We don’t talk about 9-11 deniers," he said. "We don’t talk about moon landing deniers. What do we call people who don’t believe cigarette smoking causes cancer? We call them the tobacco industry.” 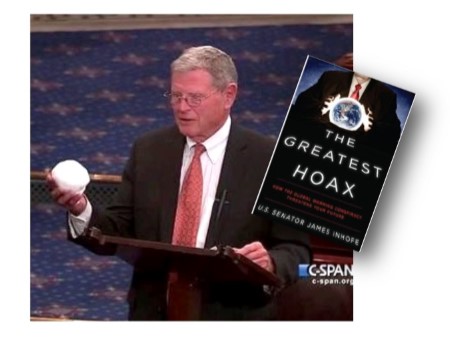 And that’s his answer for how journalists could most precisely and fairly describe the Oklahoma senator. “There’s a perfect solution for Sen. Inhofe … saying, ‘who calls global warming the greatest hoax.’ Why not let him use his words?”

There’s a lesson there for news consumers as well. Characterizations, especially those that lump together large groups of people who may not all view an issue the same way, are never as reliable as precise terms.

1. Do you agree with the AP Stylebook change?

2. Can you think of other examples of potentially loaded language and neutral alternatives?

3. Why do the words journalists choose matter to news consumers?