Earthquakes, air crashes, shootings – these breaking news stories all have one thing in common, according to the journalists behind a weekly public radio program devoted to helping news consumers: “In the immediate aftermath, news outlets will get it wrong.”

That was the very first rule in the very first “Breaking News Consumer’s Handbook” produced by “On the Media,” a weekly National Public Radio program hosted by Brooke Gladstone and Bob Garfield based at New York City's WNYC-FM. It was Sept. 20, 2013, and the handbook emerged from observations on the chaotic coverage of shootings at the Washington Navy Yard. 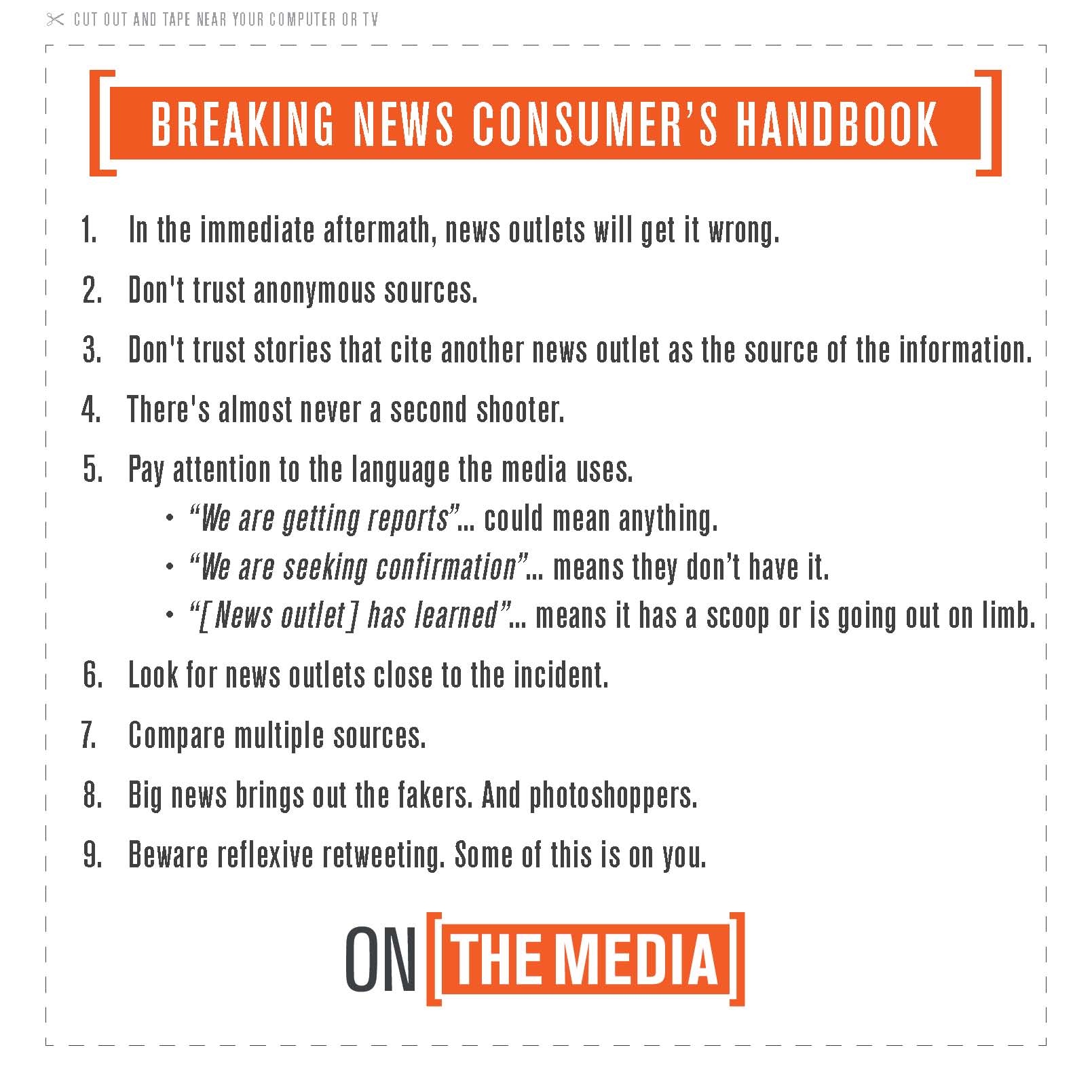 “Rather than counting on news outlets to get it right, we're looking at the other end,” wrote producer Alex Goldman. The point, he said, was to offer “some tips for how, in the wake of a big, tragic story, you can sort good information from bad.”

In the two years that followed that initial offering – really more of a listicle than a handbook – “On the Media” has released seven special editions of the handbook:

With two Malaysia Airlines crashes in the news, the first special edition of the handbook focused on the media speculation that ensues when an airline goes down. 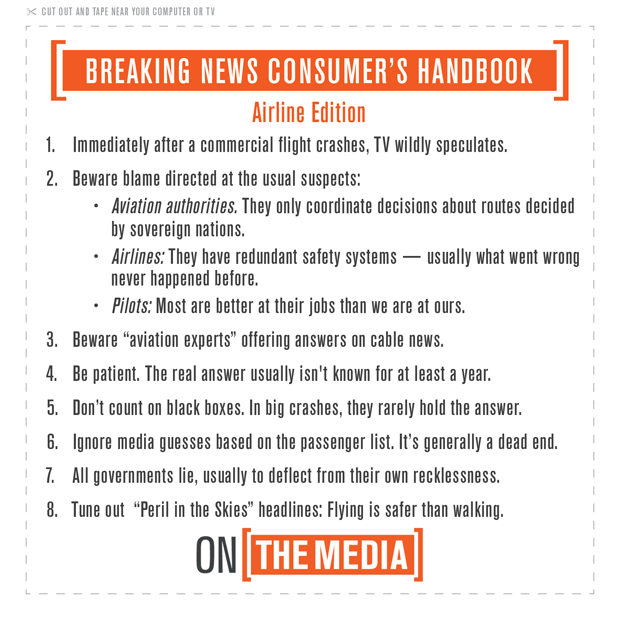 “Panic over the Ebola virus in the U.S. has dominated cable news. So, we put together a template to help the discerning news consumer see through the media's over-the-top coverage.” 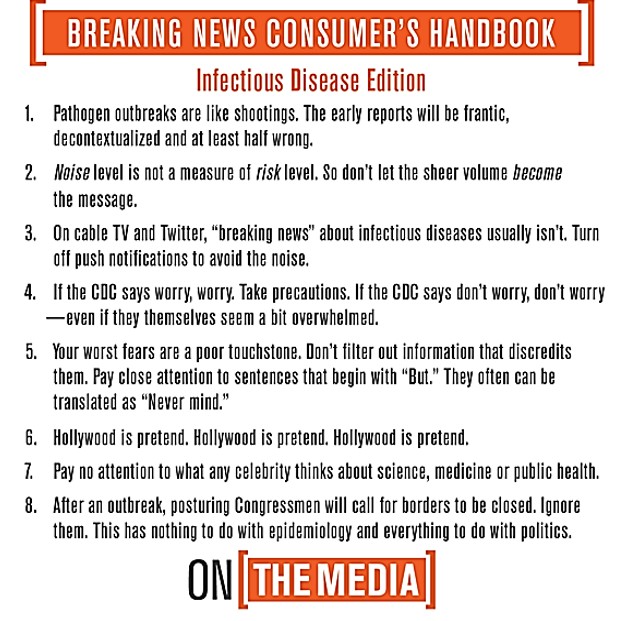 “The post-disaster media coverage of last month's earthquake in Nepal followed a trajectory we'd seen repeated after other earth-shaking events.” 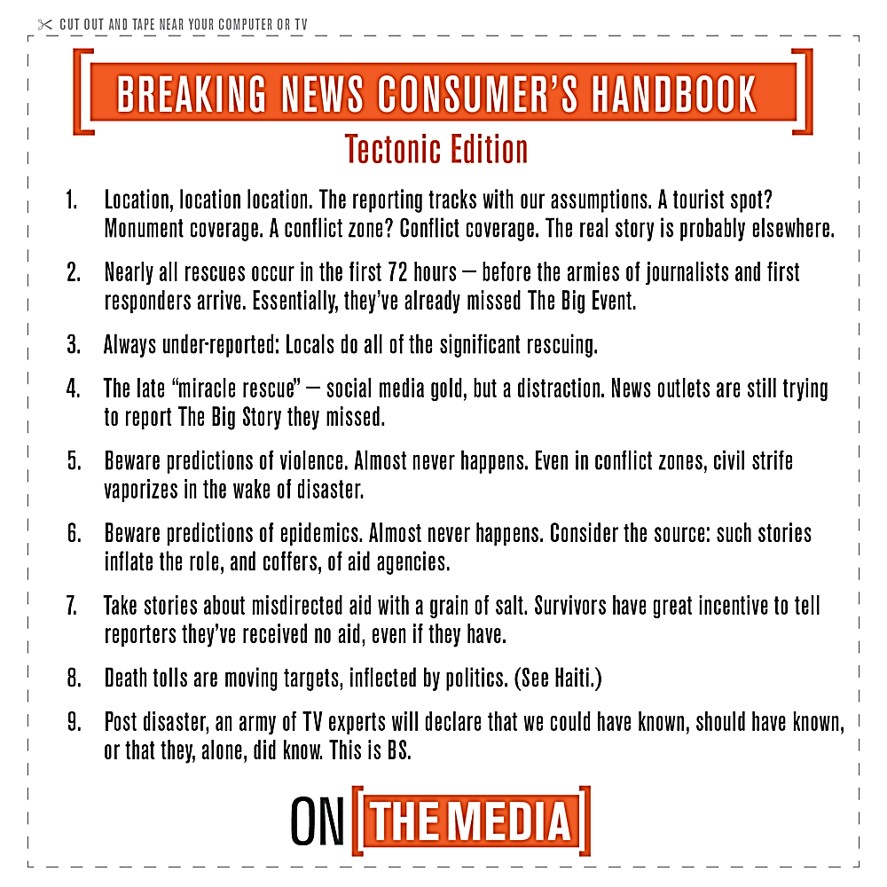 This edition goes right to the heart of the News Literacy lesson that in the digital age, news consumers have become news producers:  "As another disturbing video of police action goes viral, we provide a handbook for filming police encounters and bearing witness.” 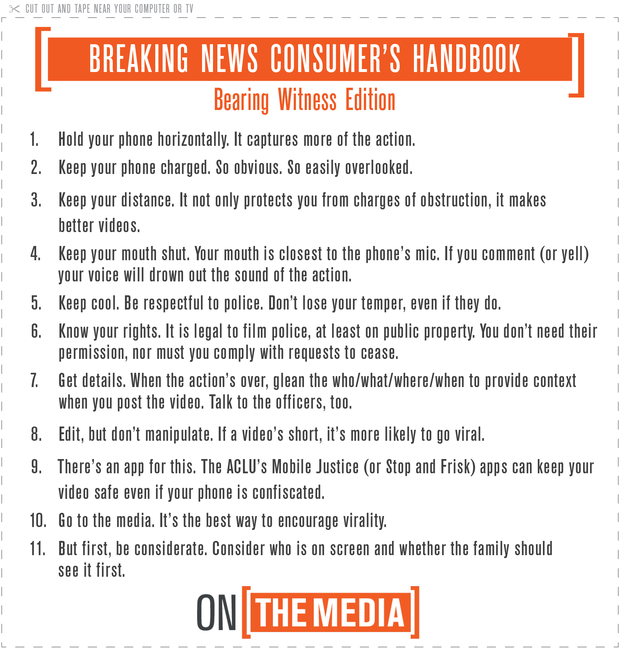 After a U.S. government data breach makes headlines, this edition offers a look at “the predictable pitfalls of the media's rush to cover a massive hack and about what we need to keep in mind for the next one(s).” 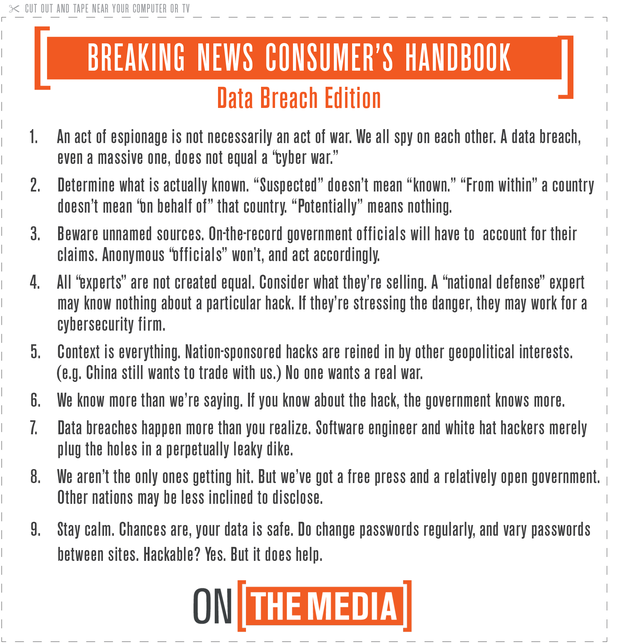 “When stock markets are volatile, the media careen from mass panic to euphoric relief to speaking in tongues.” 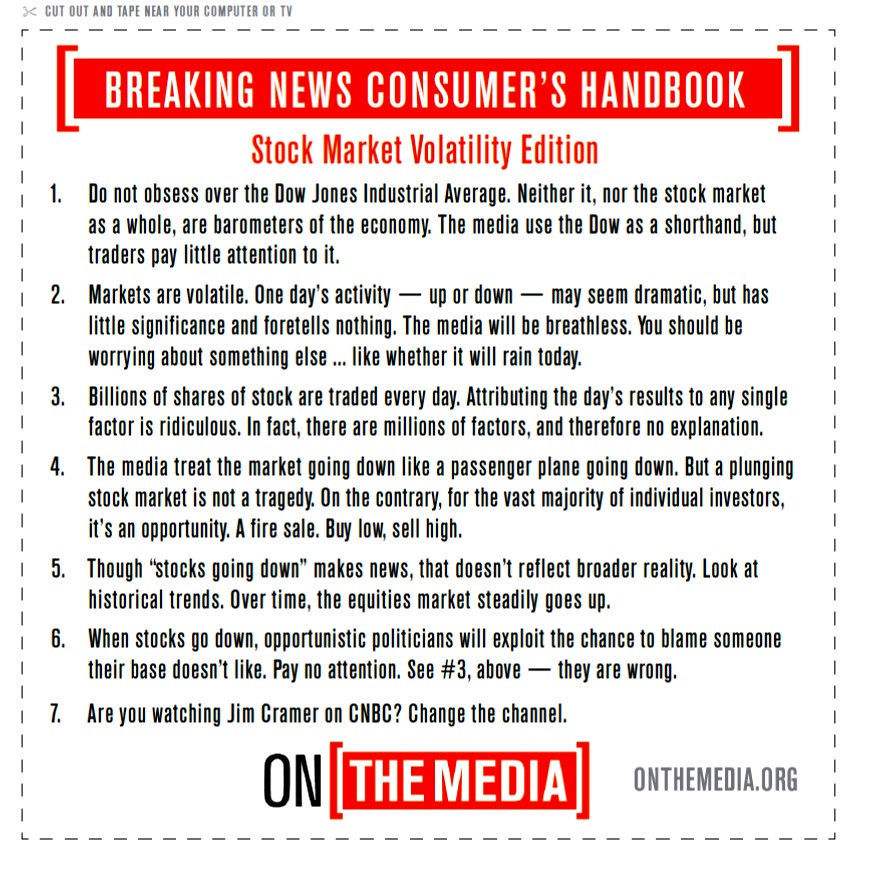 One of the most recent editions was pegged to the opening on the first Monday in October of a new session of the U.S. Supreme Court: “With the expertise of seasoned SCOTUS reporters, we've put together a handy guide for the discerning news consumer to make sense of the court, its decisions, and its coverage.” 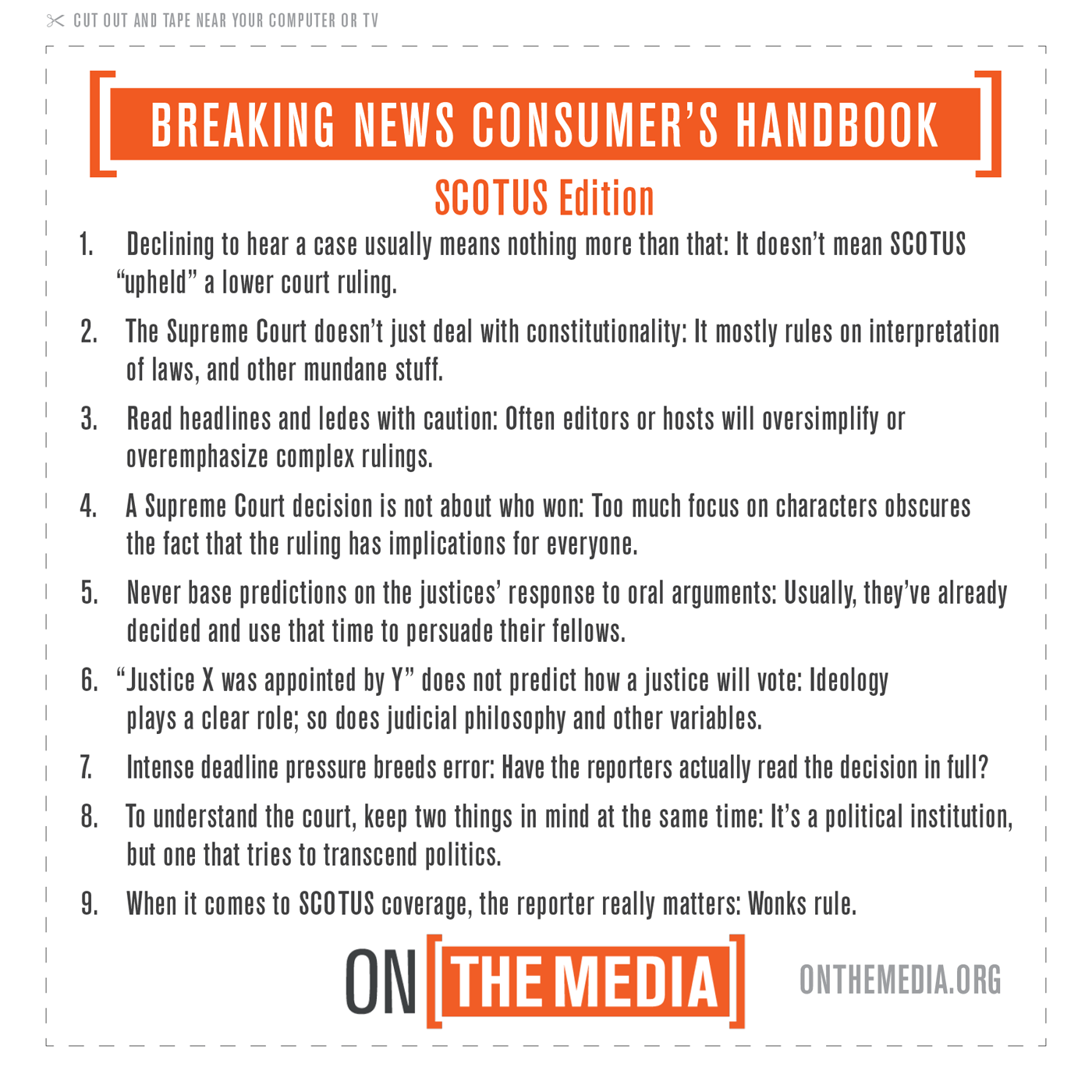 “The final point in this SCOTUS edition of our ‘Breaking News Consumer's Handbook’ should actually be the parting shot in all our handbooks,” Gladstone said.

What did they mean by “the reporter really matters”?

“Rely on certain news sources that you have found to be reliable,” said Nina Totenberg, NPR’s expert on the Supreme Court. “… You just have to develop people who have not let you down.”

The terrorist atacks on Paris in November 2015 brought the news consumer handbooks full circle.
As wide ranging as the topics covered by the nine editions were, each list seemed to bring us back to that very first conclusion in that very first "Breaking News Consumer's Handbook" -- “In the immediate aftermath, news outlets will get it wrong.”

The answer News Literacy offers in these cases of provisional truth? Follow the story. If you do – and if you draw on multiple news outlets and multiple news platforms – the best available version of the truth will emerge. Even from the chaos of a breaking news story. Or, as the Terrorism Edition put it, "be patient." 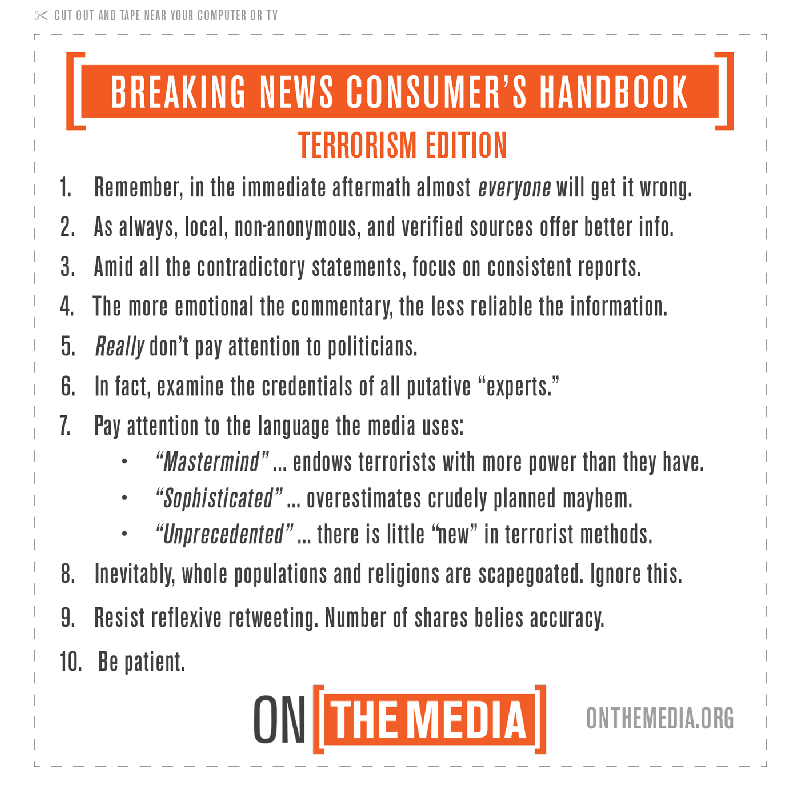