Information coming from multiple sources is usually more reliable than something that just one person is saying. In the courtroom, we call it corroboration. In scientific circles, we say data is stronger if multiple researchers conducting the same experiment replicated the findings. It’s more than just strength in numbers, which is a logical fallacy, by the way. If several people independent of one another, are saying the same thing…you can trust it more. 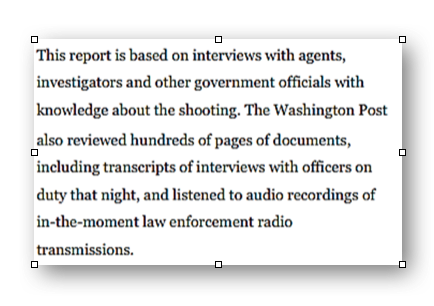 Sources who Verify with evidence are better than sources who assert.

Sources who back up what they say with facts are more valuable than ones who make unverifiable accusations or offer opinions, inferences or hunches without corroboration.

Staying on the subject of the controversy around the fallacies of the Secret Service, take a look at the following video.

A person can have impressive credentials, yet still provide only assertions. This is the nitty gritty of source evaluation: what exactly did the source say?
On the one hand, Laura Ingraham worked in the White House during the Reagan Administration, so she has actually seen the entryway and the Secret Service guard detail. On the other hand, she stretches that expertise all the way to an assertion that the fence-jumper got through the door because of political correctness in the selection of Secret Service agents and Directors.

One way to think of this is as a corollary to the Open the Freezer rule. Shouldn’t the reporter always ask a source if he or she opened the freezer? Isn’t that what we mean by asserting versus verifying?
One more way to think of it is this: In Texas, when someone is accused of bragging they often come back with this phrase: “It ain’t braggin’ if ya done it.”
Maybe that’s a useful way to think about sources. “It ain’t assertin’ if ya prove it.”