The Value of Opinion Journalism and How to Spot it

Opinion journalism is valuable because once you have studied a subject using reliable information, you often have to make a judgment or decide what action to take. Especially in your powerful Fourth Estate role as a check on the tyrannical tendencies of the executive, legislative and judicial branches. Someone who is working on the same questions, and publishing their conclusions, can help you make up your mind, particularly if they are trustworthy, which means they verify their information, they aren’t on the payroll of one side or the other…and they are accountable for what they say. An evidence based opinion in that case is helpful.

So, going back to our 4 discussion questions for this lesson,

Let's tackle the first one:

How do we tell the difference between News Reporting and Opinion Journalism?

If we can’t depend on all broadcasters and publishers to carefully quarantine, HOW DO WE TELL THE DIFFERENCE? Your ears are your most important sense in this neighborhood. In the same way that accents can define specific neighborhoods of the city, you can hear the difference when you pass from the News neighborhood to the Opinion Journalism neighborhood.

That is a straight news report.

Now, here's the first 2 minutes of Fareed Zakaria's opinion piece on the entree to Iran.

If you pay attention to the language used in each of the pieces, you’ll note characteristics in the Opinion Journalism neighborhood.

It’s like the difference between a Boston accent and a New York accent.

Once you know the accent, you can tell where a person is coming from. 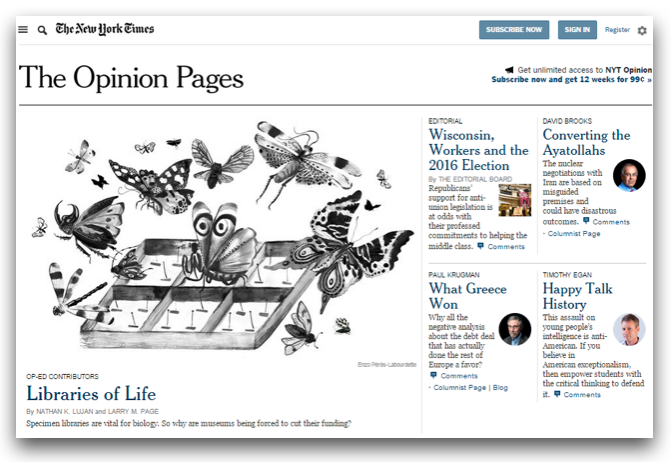 A few common labels of Opinion Journalism include:

Evidence-based, factually accurate Opinion Journalism that is NOT clearly labeled as so makes it very confusing for a news consumer. There are statistics and quotes from experts and the kind of verification that makes a news story reliable. It can seem like News Reporting. But then the writer or commentator spouts off an opinion, or leaves out a fact or two in order to emphasize one facet of the argument.

BUT If they are committed to informing news consumers, news outlets are scrupulous about labeling.

Remember that Code of Ethics.

ALSO look out for examples of...

So now that you know this, let's tackle the other questions...

‹ Cable TV News: An Opinion Niche? up Why should you care which is which? ›