Here's our take on the 2nd example.

Example 2 - The Atlantic & the Church of Scientology

The Atlantic was founded in 1857  and has launched many leading writers’ careers, publishing commentary on abolition, education, and other major issues. The Atlantic has won more National Magazine Awards than any other monthly magazine. So that sounds pretty reliable, doesn’t it?

Although Scientology has come under close scrutiny for its treatment of staff and of church members in recent years, the article that appeared in The Atlantic in 2013 was decidedly upbeat:

“2012 was a milestone year for Scientology, with the religion expanding to more than 10,000 Churches, Missions and affiliated groups, spanning 167 nations — figures that represent a growth rate 20 times that of a decade ago.”

Atlantic readers are used to a more skeptical tone and when they dug into the article, they discovered it wasn’t a news report at all. The Atlantic was experimenting with something called “native advertising” which is paid for by an advertiser, but made to look like the regular contents of the paper, right down to the typefaces and layout style.

The blowback was immediate and within hours, the Atlantic had taken the fake news report down from its website. Hard to spot

But, again…News Literacy students might not have found it very reliable even before the controversy erupted. After all…VIA

Reading the article, it’s hard to find evidence of a process of verification. Numbers are offered with no supporting information. Independence: It is obvious, almost from the start, that this is an all-positive view of the Church of Scientology, with no outside observers or critics giving an alternative view of the Church’s recent actions. And finally…Who is accountable for it? There is no byline naming the reporter who is responsible for the facts. If it was written by the Church of Scientology’s marketing staff, can they report unpleasant facts without losing their job?

A skeptical News Literacy student looking into it would only find the little yellow box at the top: Sponsor Content. 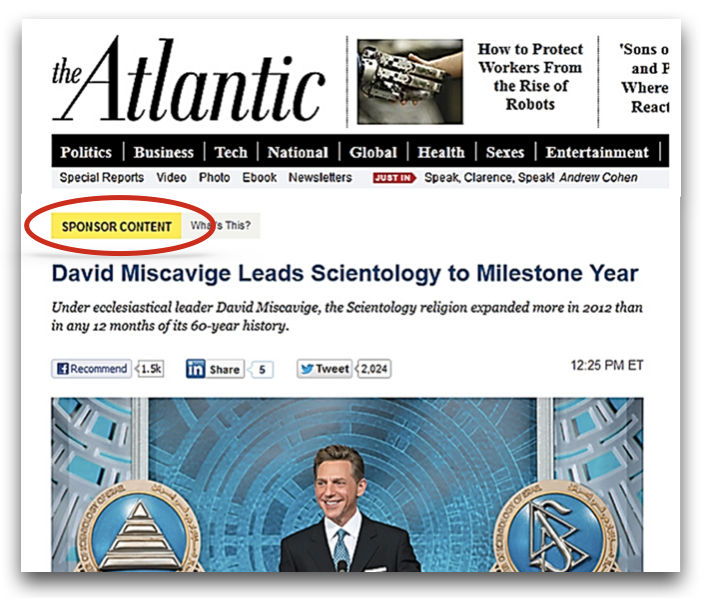 In this case, LABELING of the content becomes very important to become aware of.

Sponsored content has become a new way of generating revenue by having advertisers pay a media outlet to write and publish a story that LOOKS similar to other stories, and blends seamlessly into already existing content. It's a hotly contested issue that can be explored further here.