Lesson 10: Social Media and the Future of News

This final lesson in this News Literacy basics course brings us into the current era of news and Social Media. It provides a quick set of tools for deconstructing Social Media, and understanding the implications imposed upon citizens who now have a responsibility as not only consumers, but also publishers.

News in the Era of Social Media

Let's look at a recent example of how social media has changed the media landscape: Comedian Bill Cosby produced and starred in one of the decade's defining sitcoms, The Cosby Show, which was the number one show in America for five straight years (1985–89. It highlighted the experiences and growth of an affluent African-American family. He also produced the spin-off sitcom, which became second to The Cosby Show in ratings. Before that, he had had a successful career as a standup and an actor. Beloved, iconic American father figure. On October 16 2014, Comedian Hannibal Burress recycles an old joke about Bill Cosby’s criticisms of saggy pants on black teens and foul-mouthed comics, repeating the charge that Cosby is a rapist.

This time, someone posts a short clip of the joke online and it goes viral. 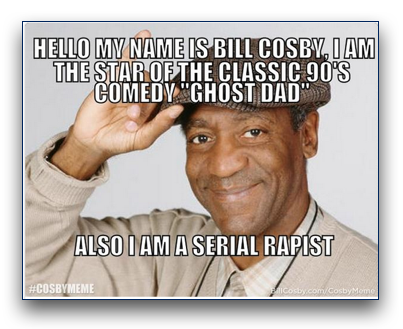 Burress’ joke is making the rounds and then some of the women who have alleged rape in the past revive their claims.

The memes get negative.

NBC-TV gets nervous about where this is headed and cancels a new show it was planning to launch, starring Cosby.

Has there been a trial?

Has he ever pleaded guilty?

He settled one case in 1996 out of court. As of March (2015) More than 30 have come forward to say he drugged and raped them, but their charges haven’t been subjected to court action.

Is Cosby guilty of serial rape?

Is his career over?

Do you have enough information to make a decision? (As further details have arisen, you might -- but the point here is to see where it all started.)

‹ Summing Up Lesson 9 up The Amplifying of Information Online ›